Marine pollution has often resulted from collisions between ships.  From a legal viewpoint the fact that two ships are involved can complicate matters for two main reasons.

One is that both ships are commonly found to blame for the collision, in which case both may be liable for any resulting pollution.  Complex issues can arise when claims are made against both.  These have included questions relating to – 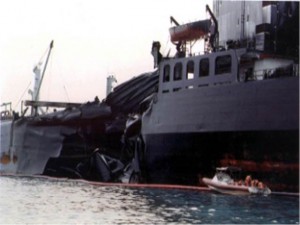 The tanker Orapin Global after her collision with Evoikos off Singapore in 1997.

In practice claims for pollution are commonly brought primarily against the spilling ship, which is then left to recover any contribution it can from the other vessel.  Complications may then arise in the context of a collision action between the two ships, involving claims and counterclaims for various heads of loss or damage.  When pollution damage is included among them, outcomes may depend on such matters as –

These and other related topics are examined in Chapter 17 of Shipping and the Environment, which deals with the liability for pollution of the owners of colliding ships.