When a ship gets into difficulties, and requests are made for it to have access to a place of refuge or shelter, the object is generally to remove it from the structural stresses of ocean swell, and to allow transhipment in sheltered waters.  In some cases access has been refused because the competent authorities felt it was technically or politically unacceptable to allow a ship posing a threat of pollution to be brought inshore.

There has been a series of cases, going back to the 1970s, in which damaged tankers became ‘Flying Dutchmen’ as successive coastal states refused them entry into territorial waters.  In these cases it was sometimes necessary for dangerous transhipment operations to be carried out in heavy ocean swell before access to sheltered waters was permitted.  Maritime experts were concerned both for the safety of those involved and at the prospect that an offshore spill could pollute much wider coastal areas than one closer to land. 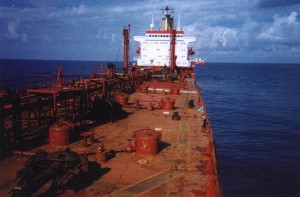 The Castor, with a 20-metre crack in her main deck, on her odyssey in search of sheltered water.

The Iberian peninsula became particularly known in the maritime community for bays which offered shelter but where access was generally refused.  Concerns that this occurred as a matter  of policy, with little if any consideration of the technical factors involved, were heightened by the Castor incident (2000).  In this instance a series of coastal states refused refuge to a damaged product tanker carrying a cargo of light, non-persistent oil which, if spilt, could be expected to evaporate without causing significant contamination.  Concerns that this exposed the ship’s crew and salvors to unnecessary risks of explosion and fire led to work being undertaken by the IMO to develop Guidelines on Places of Refuge for Ships in Need of Assistance. 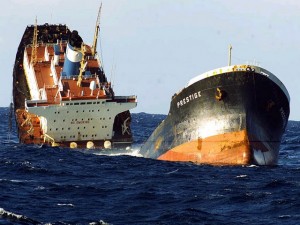 The Prestige sinking off Spain, 2002

While this work was in progress the Prestige incident occurred in 2002.  The Spanish authorities again refused requests from professional salvors for access to sheltered waters, and a naval vessel was sent to escort the ship into the Atlantic.  After six days she succumbed to ocean swell some 140 miles offshore.  Her escaping cargo and fuel oil were then taken by currents and brought ashore over hundreds of kilometres of coastline in Spain and France.  This was the worst oil spill disaster ever in Europe.

In some countries, but not others, legislation provides for decisions of this kind to be made by officials on purely technical grounds, free of political influence from ministers. This is the position in the UK, where the relevant powers are delegated to SOSREP (Secretary of State’s Representative).

Against this background the IMO adopted in 2003 its Guidelines on Places of Refuge.  These establish non-mandatory international standards of contingency planning, as an aid to the decision-making process.

These and other related topics are discussed in further detail in Chapter 25 of Shipping and the Environment, ‘The Response to an Incident – International Conventions’.