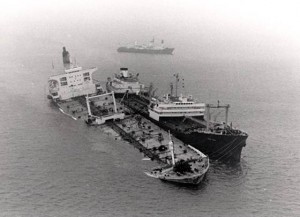 In 1978 the tanker Christos Bitas grounded near Milford Haven and was later scuttled in the Atlantic.

Laws relating to dumping at sea come into play if ships or cargoes lose their commercial value as a result of events during a voyage, and if disposal offshore is an option considered.  Questions may then need to be considered as to whether dumping is controlled by any applicable legal regime; whether it would be prohibited or a permit would be available; and as to any conditions that might be imposed. 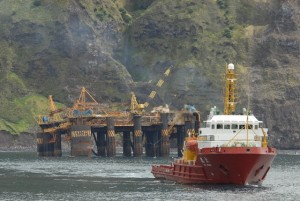 A more modern version of similar problems occurred in 2006 when the runaway rig A Turtle grounded on the South Atlantic island of Tristan da Cuhna and was later sunk in deep water.

The effect of these laws in maritime casualties has often been uncertain, largely because their primary focus is to control the shipment for disposal at sea of waste from land-based sources.  In the different context of a maritime casualty it may be less clear whether a permit is needed, whether this depends of the distance offshore, and whether any permit required is to be obtained from the flag state, the nearest coastal state, or the state of shipment.

This subject is examined in detail in Chapter 27 of Shipping and the Environment, ‘Removal of Wrecks and Dumping at Sea’.