Shipment of waste and dismantling of vessels

Maritime casualties have often resulted in ships and their cargoes becoming constructive total losses, and in options needing to be considered for their disposal.  If dumping at sea is not permissible, the question may arise whether disposal on land is possible only locally, or whether other countries offer preferable alternatives.

In the latter case the movement of a derelict ship or abandoned goods may be affected by restrictions in international and regional law on the transboundary movement of waste.  These include, among other regimes, the 1989 Basel Convention and European legislation on shipment of waste. 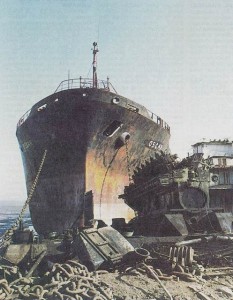 Scrapping of ships on the beaches of the Indian sub-continent

As with restrictions on dumping at sea, those on export of waste do not have maritime casualties as their primary focus.  They were introduced mainly to control the disposal of waste from industrialised nations by transport to developing countries where waste management options were cheaper but less environmentally sound.

In the maritime sector these regimes have been highlighted by controversy surrounding the scrapping of ships on the beaches of developing countries, leading to the 2009 Hong Kong International Convention for the Safe and Environmentally Sound Recycling of Ships.  This is not expected to come into force before 2020 but it has ben given accelerated effect in Europe by the EU Ship Recycling Regulation of 2013.

Similar controversy arose in the Probo Koala incident in 2006, when a serious health hazard resulted from the irregular dumping of slops by waste disposal contractors in the Ivory Coast, leading to protests that disposal of the slops should have occurred in Europe. 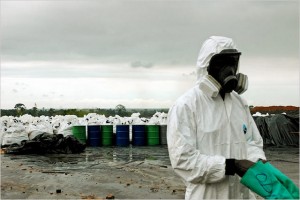 Restrictions of this kind may likewise come into play in the aftermath of a maritime casualty, when a derelict ship or abandoned goods may be treated as ‘waste’, and when  limited time may be available to consider options and obtain any permits required.

The main legal regimes are described in Chapter 28 of Shipping and the Environment, ‘Shipment of Waste and Dismantling of Vessels’.  Various documents relating to shipment of waste and recycling of ships  can be seen under the Documents tab.